Recently, I got into developing a couple of extensions for Visual Studio. As many of you know, once you create Visual Studio Package project (or any VSIX project), by default your application will be set to start debugging in a Visual Studio Experimental instance.

This behavior is set as default by the Visual Studio Package project template and you can see it the following screenshot: 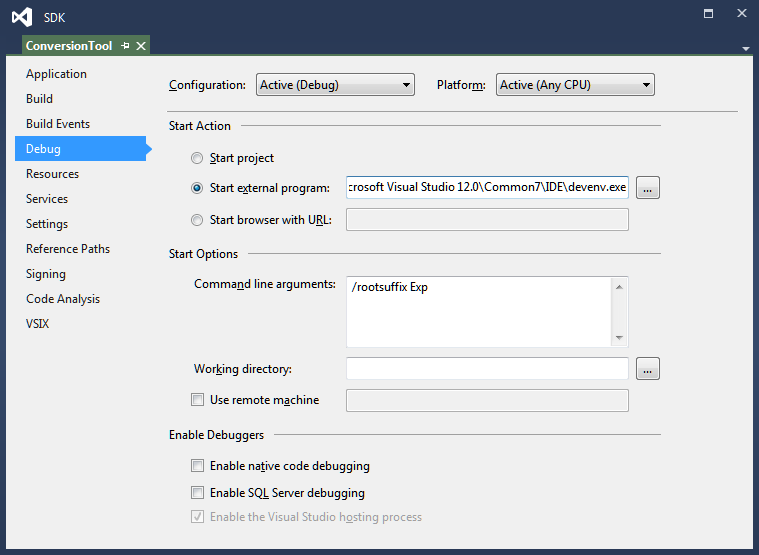 As you can see, we are pointing to the Visual Studio executable (we can vary that parameter for testing our extension with different versions of Visual Studio) and we are passing the following command line arguments to it:

This is sufficient to start Visual Studio in Experimental instance mode and once you hit F5 and start debugging you will notice that the started instace of visual studio in the application title bar contains the “Experimental Instance” suffix.

All the files in the directory location are considered part of that instance. Any additional experimental instances will not be loaded by Visual Studio unless the directory name is changed to the default location.

Till here all fine, but what happens once you have “ruined” your experimental instance environment?
Well, you will need to reset it. Although you can find all of this information on MSDN, it isn’t linked or clear enough on how to proceed.

Once the cleanup is performed, the next experimental instance you lunch will found itself in a clean environment. In case you are working with Visual Studio 2012 change the VSInstance parameter to 11.0.

You can find more details about the CreateExpInstance Utility here.